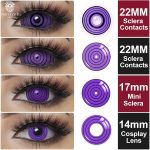 The Rinnegan is part of the three great Dojutsu (“Eye Techniques”) with the Sharingan and Byakugan. It is praised as the most powerful one and said to be of a divine power. The one possessing it would either be a god bringing peace and calmness or a god bringing chaos and total destruction. The first one to ever possess the Rinnegan was Hagoromo Otsutsuki. regarded as a godlike figure since he was the first ever on earth to understand meander of Chakra. With this Hagoromo Otsutsuki founded the religion and school of “Ninshu”. which comes before the Ninjutsu. Following the defending of the world against the “Ten-tailed beast”. he was sacred as the “Sage of Six Paths”. One who’s endowed with the Rinnegan is able to use the “Six Paths Technique” such as: Deva Path. Asura Path. Human Path. Preta Path. Animal Path and Naraka Path. Respectively. attractive and repulsive force; mechanic alteration of the body; extraction of the soul; absorbing chakra; summoning of various creatures; access to the deity that rules over life and death. The Rinnegan is in appearance an eye with black circles. circling around themselves each. The Rinnegan Eye Contacts is available in 3 differents diameters and will be perfect for your naruto cosplay. Be the first to awaken its power and become a god! The Rinnegan Contact Lenses is yours to be in just one click!

Be the first to review “Rinnegan Contacts” Cancel reply