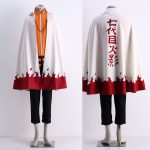 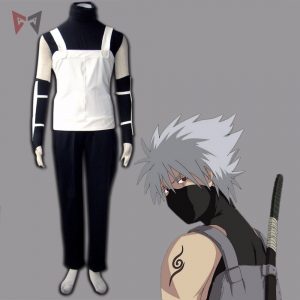 Naruto always dreamt of becoming Hokage! His father. Minato Namikaze was the Fourth Hokage. Naruto always worked hard to become the powerful shinobi he is now. even though he had some advantages with the chakra of the Demon Fox infused into him at birth (by seal). He proved to the people of his village that he was not what they thought he was! Even Sasuke his life-long friend and rival acknowledged Naruto’s force at some point. Naruto is seen becoming the Seventh Hokage after his mentor. Kakashi Hatake. He then wears his classic tracksuit (black pants and orange vest) but now he has a white cape with red flames on the bottom edges and with the kanji for “Seventh Hokage” This Naruto Cosplay Costume is an exact replica of the original outfit Lord Seventh wears in the serie. This cosplay includes the top. pants and cape. This is your chance to get yourself in the shoes of your favorite character. Naruto Uzumaki. the Seventh Hokage!

Be the first to review “Naruto Cosplay Costume” Cancel reply