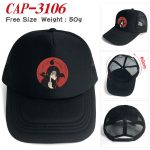 Itachi is a very powerful member of the Uchiha Clan. He showed multiple times during the anime his ability with genjutsu. jutsu and melee range combat. Most of his fight ends up with the target being trapped under a very powerful illusion. Remember when Orochimaru tried to attack Itachi to steal his eyes ? Well. Orochimaru ended up being paralyzed and Itachi simply walking away. This Itachi Jutsu Hat pictures him performing an hand sing to cast a powerful jutsu and maybe genjutsu ? Our Naruto Hat are the best in the entire web. They are made out of cotton to promote comfortableness and breathability when you wear those. A great feat to protect your eyes from the sun. even by hot temperatures! You get the chance to do that while still being swagged on. Our Naruto are perfect for fans of the Naruto Anime but not only. no discrimination here! We’re pretty sure it would please your friends. family and lovers to receive such a gift.

Be the first to review “Itachi Jutsu Hat” Cancel reply